x Thank you for submitting an inquiry. We will get back to you as soon as we can.
x

We are sorry, this cruise is not available to book at the moment

RATES DO NOT INCLUDE:

Bookings are on request and need to be confirmed.

Deposit of 30% should be paid within 7 days from our written confirmation.

Final payment is due 50 days prior to departure. 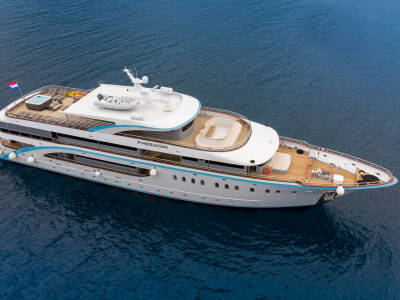 With its perfect size, manovering abilities and its elegant 19 cabins our newly built, yacht-like Freedom ship will be classified as 5* rating will satisfy your refined expectations for a comfortable cruise along the Adriatic Coast.

By selecting dates or sending an inquiry you are not committing to any purchase.

8-Day Cruise From Dubrovnik to Split on Freedom Itinerary 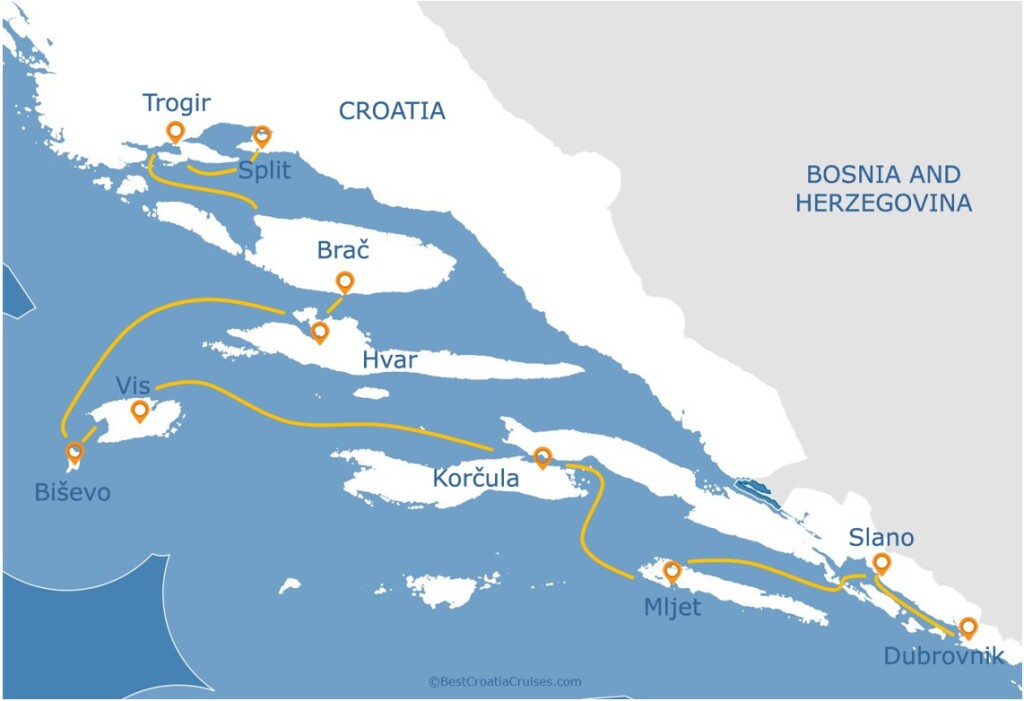 You will be transferred from Dubrovnik airport or your Dubrovnik hotel to harbor, where embarkation begins at 13:00h. Get settled in your cabin before attending a Welcome reception followed by dinner this evening.

Start the day with a walking tour of Dubrovnik, the “Pearl of Adriatic”. Walkthrough STRADUN – both a street and a square, the most famous place inside the town walls, the famous city enlisted as UNESCO’s World Heritage site, where your guide will show you the most interesting sights of Dubrovnik. After returning to the ship enjoy the magic scenery as the ship cruises around Dubrovnik city walls to continue to one of the Elaphiti islands for a swim stop. Afternoon arrival in Slano, a peaceful fishermen’s village and our starting point to Ston, once fortified small village famous for its oysters situated on Pelješac peninsula. Pelješac peninsula is known as one of the best wine-producing regions in Croatia. After exploring the town we leave to a small nearby village to enjoy the authentic local oyster tasting. Overnight and Captain’s dinner in Slano.

In the morning we head north to the Island of Mljet. Join the Cruise Manager for a stroll to the famous salt lakes in the Mljet National Park. Continue our cruise towards the Korčula island best known as the birthplace of Marco Polo. Afternoon arrival in Korčula followed by a guided walking tour of this enchanting town surrounded by walls, which is one of the best-preserved medieval cities in the Mediterranean. Overnight in Korčula where you can enjoy a gourmet experience at the multiple restaurants and bars.

Early in the morning, we sail to small island Biševo to visit the Blue Cave, a magnificent natural phenomenon. As sometimes weather conditions can be very unpredictable, the possibility of our visit will depend on those conditions, however, you will be notified of this on time. Cruise towards the island of Vis, once a strategic naval Yugoslav base and restricted to the public. Due to this isolation, Vis has a special charm – “the Mediterranean as it once was” making it really interesting to visit. Try some exquisite wine sorts in one of the Vis traditional wineries. If interested, visit the remains of the Roman thermal place, City museum or simply take a walk enjoying the views. Overnight in the port of Vis.

In the morning head further towards Hvar, the longest and sunniest island in the Adriatic, with a swim stop and lunch on board. Afternoon arrival in Hvar town followed by a tour of the town – the Renaissance cathedral with its original tower, and the oldest community theatre in Europe founded in 1612. After the tour set sail towards Stari Grad, one of the oldest cities in Europe where you will overnight.

Early morning departure to the old Dalmatian town Trogir. Trogir is sometimes referred to as “miniature Venice” or a “mini Dubrovnik” because of its ancient walls, or a floating museum town – as it has masterful architecture including some stunning Venetian palaces. After disembarking in Trogir we will take the bus to visit Krka National Park. You will discover the pristine nature and waterfalls of the Krka National Park, an area extremely rich with flora and fauna. Overnight in Trogir.

In the morning join our guided tour of Trogir with a local tour guide. Set sail to Split with a stop along the way to swim and relax, if weather permits, with lunch on board. In the late afternoon, we arrive at Split to spend the night. Arriving in Split, join a guided tour of the city, visit the seafront promenade and Roman Emperor Diocletian’s Palace. The historical center of the city is listed as a UNESCO World Heritage site. Your evening is free in Split.

After breakfast, it’s time to disembark. You will be transferred to Split airport or your Split hotel.