ELAPHITE – acollective name for the islands northwest of Dubrovnik that separate the Koločep Canal from the northern coastal area of Dubrovnik. They extend in the direction of the so-called Dinaric Furrow (from northwest to southeast).

The old historical name was first used by Pliny the Elder (1st century) in his work Naturalis historia, III, 152. The Greek name (elaphos = deer) indicates that there could have been such animals on these islands.

The Elaphite islands include the islands of Jakljan, Šipan, Ruda, Lopud, Koločep and Daksa (some also include Lokrum) and the small islands of Olipa, Tajan, Crkvine and Sveti Andrija (St. Andreas).

There is a beautiful town Dubrovnik situated on the South end of Croatia and in front of it, accurately on his west side, stands string with few pearls immersed in the sea – they are Elaphite islands. Their name, Elaphite islands, is hiding behind the real meaning of this word – deer, the animal inhabiting that area in the past.

Koločep, whose another name is Kalamota, is a beautiful green island, covered whit pine, orange, lemon and olive trees.

This garden that floats on the sea has raised its tourist offer long time ago, and offer accommodation such as beautiful apartments and villas.

The fist You will note is the clean, bluish sea and amazing beaches.

Its interesting to note that on the island there are no roads and no vechicles at all. 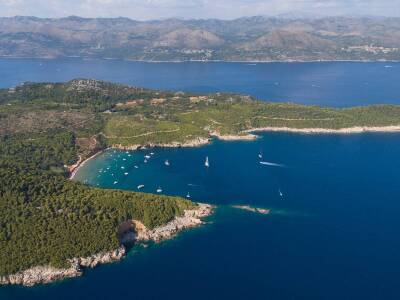 The island with the most developed infrastructure of Elaphite islands is Lopud, and it is not only famous for its enviable nature and beaches but also for its long history and tradition of maritime way of life.

The most known captains and sailors are from this place, and thus its history is more interesting, because once there where 30 churches, many monasteries, villas and much more people living on the island than today.

Now, there are some churches left behind, and You can find few remains of the important past. Accommodation is in the same range as the island, rich and supreme.

Šipan is the biggest island in this archipelago and beside its ancient history, it is full of legends and mysteries.

The nature beauty is similar as is on other two islands, but it’s also different in its way.

The main settlement of Šipan has around 300 inhabitants and during the summer months represent the main attraction of the island.

Near the Island of Šipan floats a little island Jakljan which is all covered in green forest, hiding camp and restaurant on it.