The Kornati archipelago is located in Dalmatia, a coastal region of Croatia opposite the mainland cities of Biograd and Šibenik. Infact, Kornati are a group of 125 islands, islets, crags and reefs scattered in the intense blue sea of the Adriatic covering an area of 63 square kilometres.

Apart from a minuscule area of cultivated land, fig trees, olive groves and vineyards the islands are rocky, covered with sparse grass with occasional trees and Mediterranean scrub. Over the centuries erosion has been caused by the sea, over-grazing by sheep and fire.

This erosion has deprived the islands of their primeval luxurious vegetation, and the people have moved to more hospitable islands.

Some of the bigger islands were inhabited during the Neolithic age by Illyrians. The islands have no spring or surface water, only rainwater collected in waterholes. The unique feature of the islands lies in their rugged shores with many caves, funnel like holes and coves.

The karst landscape of chalk limestone prevails with clusters of rosemary, juniper, lavender thyme, myrtle and sage. Pathways, leading to steep precipitous gigantic cliffs facing the open sea and others gently slope towards the sea, usually ending in a small bay with a jetty and several cottages surrounded by pine and other trees.

The sea around the islands is rich with fish and a great variety of marine life. There must be very few places in Europe where such a pristine environment remains!

This geomorphologic phenomenon has almost a primordial aura, since apart from two small settlements on the biggest island all others are uninhabited. The water in the countless bays of the Kornati is deep and transparent, and the tranquility of the islands is almost matchless. 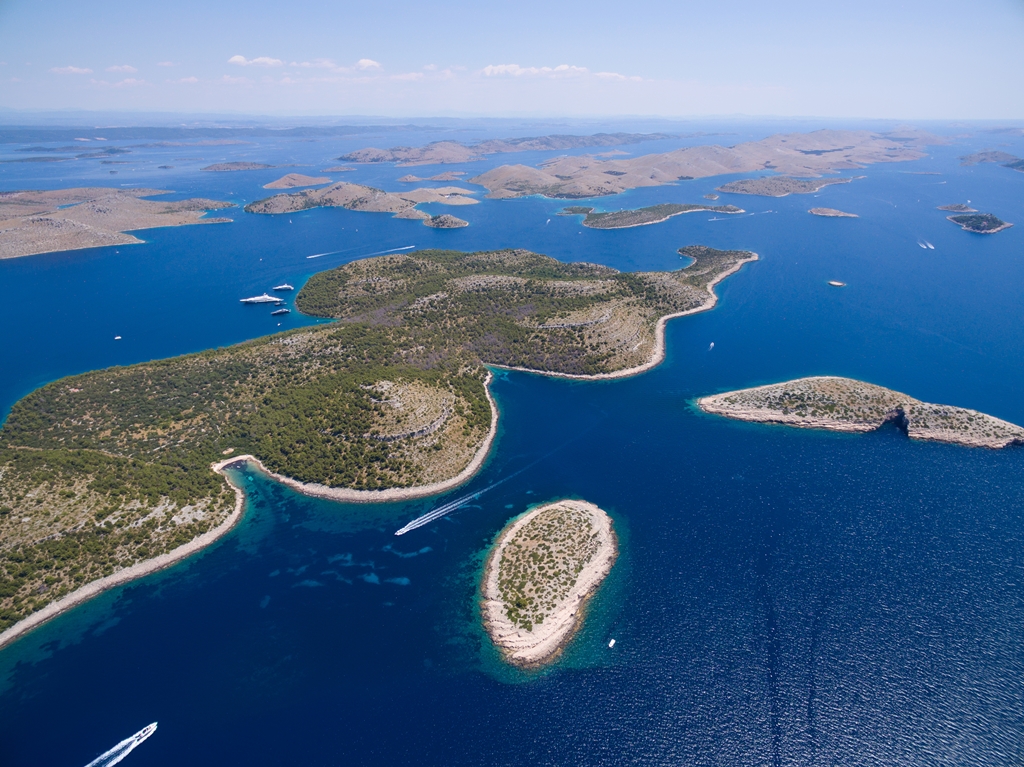 This picture of encounters between small segments of land and sea cannot be complete without white sails gliding slowly in the afternoon sun.

It should be added that the Kornati are not only a natural wonder, but that there are interesting historical monuments there too, such as the foundation of the Roman villa in Mala Proversa, and the ruins of the early Christian church of Sv. Marija (St. Mary) and the Byzantine fort on the biggest island. Many Kornati cliffs and reefs have no name, but some have unusual names that suit their appearance: Klobucar (Hatmaker), Balun (Ball), Kosara (Basket), Mrtvac (Dead Man).

According to legend, the people of Murter, always quick of wit, reported these names to Austro-Hungarian surveyors.

The most indented archipelago in the Mediterranean, the Kornati are the continuation of Telašćica Nature Park which, in turn, boasts the safest, most beautiful and largest natural port of the Adriatic, rocks that plummet into the sea from a height of 200 metres, and Lake Mir – the only saltwater lake on the Adriatic.

In 2017 we welcomed the launching of Arca, a magnificent boat perfect for exploring our beautiful coast and its islands.