Krk is the largest island of the Adriatic; it is an island of great beauty and history. It is the fruit of nature and of the centennial human endeavour to preserve at least traces of all the historic periods, testimonies of times past and of the present. On this island everything will enchant you. It is enough to spend just one vacation on the island and rest assured you will return next year as well.

Why Krk Island is a Must Visit Spot While Cruising Croatia

You will be drawn by the inhabitants of the island, by their hospitality as well as the quality of the service they render, while the beautiful and diversified nature will remain impressed in your memory, especially the crystal clear and sky blue sea.

The island of Krk is the largest jewel in the series of over 1000 Croatian islands. It is connected to the mainland by the imposing bridge of Krk and Rijeka Airport, as well as by shipping routes to the whole world.

The tourism tradition of the island of Krk is over a millennium old. The hospitality of the residents is an irreplaceable guarantee for a pleasant stay on the second largest island in Croatia .

Krk Island lies on the central 45th parallel, ie exactly in the middle between the equator and the north pole. The greatest advantage from this location is evident from the particularly pleasant climate of this part of the Mediterranean. KRK is a sunny island with 2500 hours of sunshine a year.

Areas with dense forests, mountains and fertile valleys alternate with karst landscapes, larger and smaller bays, wonderful sandy and pebble beaches. Many of the ancient customs and festivities still offer opportunities for relaxation and entertainment.

The historical center of the island, from the time of the Illyrians and Romans, the city of KRK with the imposing castle of the Frankopani and the well-preserved city walls.
Sport and recreation are part of the entire tourist offer on the island of KRK, tennis courts, mini golf, outdoor or indoor swimming pools, horse riding, water sports, sailing, water skiing, paragliding, diving and discovering the secrets of the sea surface. Bicycle and walking paths are also available.

Island of Krk , the largest island in Croatia , a dream place dominated by unspoiled nature, fantastic beaches , a crystal sea and magnificent and suggestive countries, all to be discovered.

What To See and Do in Krk 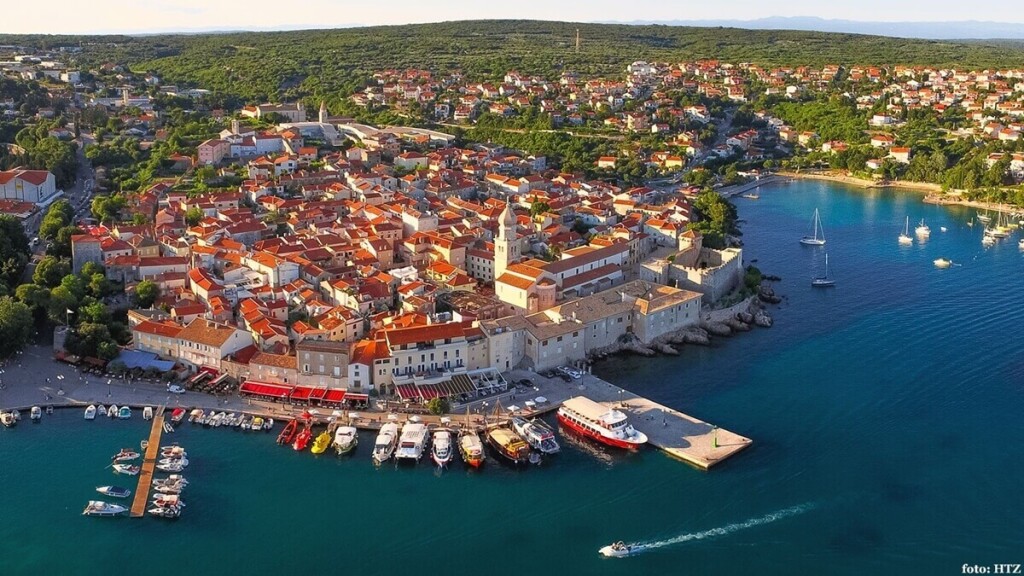 The city of Krk , located on the west coast of the island just 25 km from the bridge, represents the historical administrative, political, economic and religious center of the island . The city is also the largest on the island and the richest in cultural heritage.

Start from the city of Krk , the cultural and administrative center of the island , with the historical area where you can admire the Cathedral , the beautiful churches and the Castle , and the many rocky and pebble beaches where you can relax.

Then head south to Baška , one of the most beautiful destinations on the island between dream beaches , one above all the beach of paradise, and the famous tombstone that with 13 lines of text written in ancient Croatian language represents the symbol of Croatian literature.

If you want to taste a delicious typical product move to Vrbnik where the local wine , with a golden color, is very special, if you are looking for the ancient traditions of the island go to Punat , where on the islet of Kosljun the ancient Franciscan monastery awaits you, if instead you want relaxation and intimacy then for you there is Malinska between hidden coves and beaches.

Between one day at the beach and another, organize a trip to the Biserujka cave , over 100 years old, where magnificent stalactites, stalagmites and other natural treasures await you .
And if you love sports , the island of Krk continues to amaze you with bike races, regattas, mountaineering, walks surrounded by greenery and many areas ideal for fantastic dives . 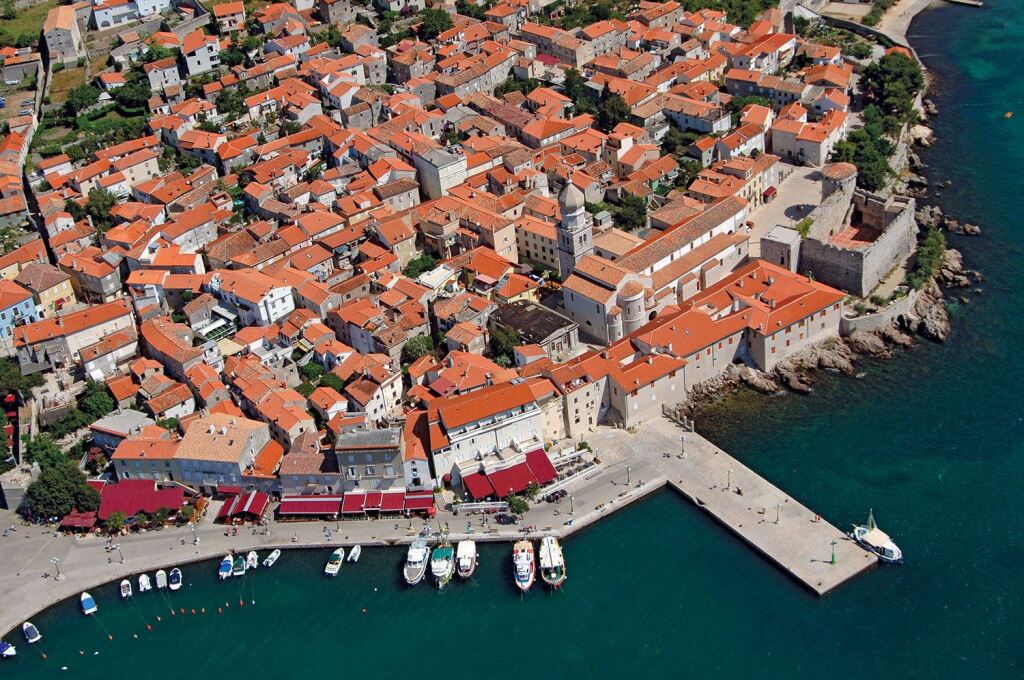 Set off to discover the historic center made up of narrow streets and don’t miss the beautiful 5th century Cathedral and the churches of S. Margherita and S.Quirino , patron of the city, where you will also find a beautiful display of sacred art and an 18th century bell tower .

The main square instead is Piazza Placa with the Town Hall building (XV century) and a beautiful Renaissance fountain. Among other things not to be missed are Kamplin Square with the Frangipani Castle and the square Tower , the Canonical House, which houses an 11th century Glagolitic inscription, and the church of S. Krsevanwhich dates back to the fifth or sixth century.

On a hill then you can visit Trsat Castle – a fortress built by the Francopan dukes of Krk, to protect their possessions. Unfortunately over the centuries, among the many attacks and earthquakes, the castle was almost completely destroyed, fortunately in the 14th century, however, it was purchased and renovated in neo-Gothic style by an Austrian.

Among the city museums the best is certainly the Naval History Museum , set up at the end of the 19th century, where the activity of the shipyards in the city is told through the display of many archaeological finds, naval models and weapons.

The sialnd of Krk is also made up of many splendid rocky and pebble beaches all well equipped for relaxing in the sun and cooling off in the crystal sea.

Fresh fish, e.g. B. Dragon’s head, anglerfish and grilled squid are specialties of the country. The local sheep’s cheese, ham and the well-known lamb meat from the island of Krk were a must for any feast by the Roman emperor Nero. The traditional way of life and customs, the carefully maintained harmony between man and nature can still be felt today in the olive groves, vineyards and fertile fields of the island.

Today the white wine “Vrbnicka zlahtina” and the highest quality natural olive oil are among the most famous agricultural products on the island. In the story of the traditional way of life on the island, cattle and sheep breeding, but especially the famous lamb from the island of KRK, should not be missing. The same applies to fishing, which has been part of life on the island since time immemorial.

A small fisherman’s village Njivice on the Island Krk is mentioned for the first time in the charter of gift of the count Ivan Frankopan, from the year 1474.Although it used to be a small village of Krk, where the inhabitants mostly lived as fishermen, cultivated olive and fig-trees, today Njivice is a place for rest, relaxation and recreation.

Today there are a lot of beautiful beaches in Njivice, the sea is exceptionally clean and blue, the climate is mild, and all this tourned the village into a very well-known tourist destination.
In a wooded surrounding, along gravel-and rocky beaches, place for sunbathing and arranged, hotels and situated, as well as camping site, bungalows, private apartments and well-known pubs.

Whether on the gravel-beaches in village, or in hidden bays in the vicinity for those who prefer peace and quietness, Njivice are the best choice.