In the hinterland of Central Dalmatia runs the river Krka, the bigger part of which was declared a national park. More than two thirds of its total length flows through a canyon, with mostly vertical walls over a hundred meters high.

There are seven waterfalls on the river, where a vast amount of water plunges with great energy. The most beautiful falls are Roski slap and Skradinski buk; the latter consists of seventeen cascades with the total drop of over forty meters.

Situated between the last two waterfalls is a lake called Visovacko jezero, on which there is an island with a monastery.

The Krka River with its two deep canyons penetrating the Dinaric Alps creates a myriad of cascades and waterfalls, of which the most famous is Skradinski Buk, the tallest limestone barrier in Europe, 46 m in height.

There is also the centre of the Krka National Park, one of the most prized ecosystems in Europe. The falls are lovely, and one could spend days sunbathing, amongst the rocks under the tumbling water and paddling in the more docile patches. Upstream is the islet of Visovac, on which a Franciscan monastery nestles among the thick growth of cypresses. 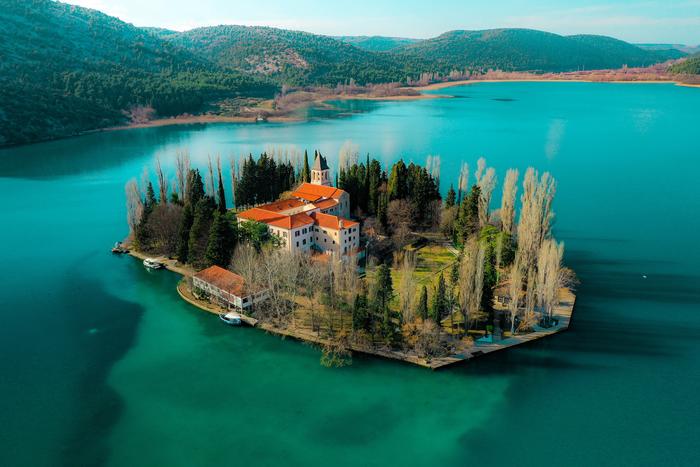 The monastery has a collection of seventeenth -century paintings and in its library a beautifully illustrated fifteenth-century Aesop’s Fables, one among three left in the world. Not far from Skradin (18 km) is the old Dalmatian town of Sibenik – worth visiting for its fine Gothic-Renaissance cathedral of Sv Jakov, which took more than a century to complete.

This cathedral has many unique features and was designed and built by Juraj Dalmatinac, a local mason and Nicholas Firentinac, a mason from Florence. There is a famous exterior frieze of seventy-one stone heads carved by Juraj Dalmatinac, said to be portraits of those local citizens who refused to contribute to the cost of building of the cathedral. The nearest airport Zadar and Split.

8-Day Cruise From Split to Dubrovnik on Freedom 2021

8-Day Cruise from Split to Dubrovnik on Symphony 2021

You will stay speechless while cruising around the Croatian coast on this specific cruise; Diocletian's Palace, Blue cave with its breathtaking appearance, drinking wine while watching one of the most beautiful sunsets you'll ever see..

In 2017 we welcomed the launching of Arca, a magnificent boat perfect for exploring our beautiful coast and its islands.