The Island of Mljet is also known as the greenest island in the Adriatic see. Its landscape evokes the legend that Ulysses visited Mljet on his wanderings in the Mediterranean.

The island  is full of history. Whether there is any foundation to the legend is not easy to determine, but it is a fact is that the island has a long history, as evidenced by numerous Illyrian ruins, mediaeval churches, and its biggest attraction-a Benedictine monastery built on the islet in the middle of Vransko Lake in the 12th century.

After that, the monastery was rebuilt several times, a common occurrence in the Adriatic area during its turbulent history.

Mljet National Park is one of the 8 national parks in Croatia. Mljet is located in the South Dalmatian archipelago, south of the Peljesac peninsula, from which it is separated by the channel from Mljet island; It covers the area of 100.4 km2 and has a population of 1237.

The island relief is characterized by hills of limestone cliffs with many karst valleys and fields (Polje): Polacno polje, Ivanovo polje, Blatsko polje, Kneze polje. The widest field, Babino polje, extends south of the highest elevation (Veli grad, 514 m). In the extreme northwestern part of the island there is a subsidence with the lakes Veliko jezero (Large lake) and Malo jezero (Small lake).

The flow of the water flowing through the canals is very strong and changes direction every six hours due to the ebb and flow.

The change of direction of the ocean current was used to drive water mills in the Middle Ages. In the interior of the island there are four other karst lakes, which the locals call “blatina” and “slatina” (Croatian, for example Tümpelsee) (eel grounds). The larger bays are called: Pomena, Polace, Tatinica, Sobra, Luka Prozura, Okuklje, Saplunara. There are many small islands off the coast.

Mediterranean climate; main  air temperature in January 8.7 ° C, in July 24 ° C; average annual rainfall 1000 to 1500 mm; 2580 hours of sunshine a year. Forests cover 72% of the island’s surface; the beautiful pine forests are best preserved on the northwest side of the island.

The main towns (Babino Polje, Prozura, Maranovici, Korita, Blato, Ropa, GoveDari) are located in the interior of the island, lined with fertile fields; the nearest bays on the north coast serve as ports. Mljet has ferry connections to the Peljesac peninsula and Dubrovnik.

On the Mali Gradac hill (near Babine Kuce) there are remains of an Illyrian fortification. In Roman times the island was mentioned under the name Melite. There are finds from this period all over the island: in Pomena, Zare, Pinjevica.

The ruins of a palace and an early Christian basilica in Polace date from the transition period to the early Middle Ages. Around 536/537 the island was annexed to the Eastern Roman Empire.

Later it fell to the Neretljani tribe, then to the Principality of Zahumlje. The early Romanesque churches of St. Pankratius, St. Andreas and St. Michael in Babino Polje date from this period.

The head of Zahumlje, Desa, donated the entire island to the Benedictines (from Pulsano Abbey on Monte Gargano in Puglia) in 1151, who built their abbey and church on the islet of the Great Lake. In 1333, Mljet was donated to the Republic of Dubrovnik by the Bosnian Banus Stjepan.

From this time on, the island was administered by a prince with official residence in Babino Polje. In 1345, Mljet received its own constitution. In the Gothic period, several churches were built on the island (the parish church in Babino Polje, the Trinity Church in Prozura, St. Veit in Korita – all from the 15th century).

The church ruin St. Maria vom Berg dates from the transition period from the Gothic to the Renaissance. The profane architecture is represented by some characteristic buildings (the Renaissance castle of the Mljeter prince in Babino Polje, some baroque houses from the 17th / 18th centuries in Korita). 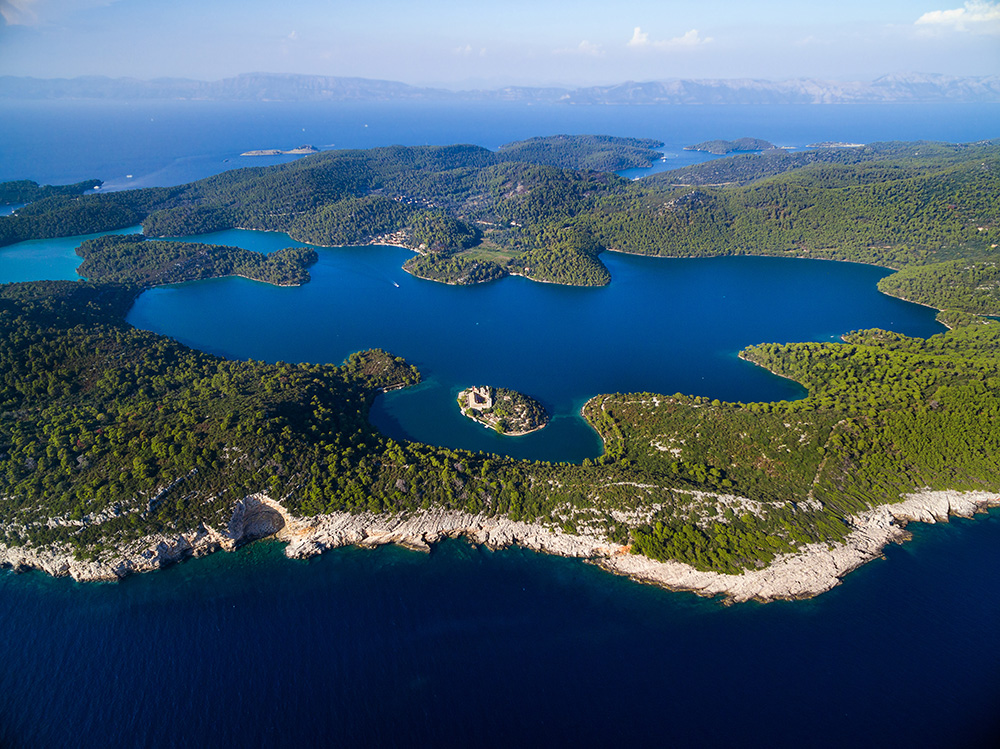 Mljet National Park (established since 1960) is located in the northwestern part of the island and covers 54 km2. The park includes the Great and Small Lakes as well as the Soline Canal.

The lakes are connected to each other and to the sea by narrow and shallow, artificially deepened channels. The national park contains a large number of plant communities: Aleppo pines (Pinus halepensis) and holm oaks (Quercus ilex) with dense maquis.

The Big and Small Lakes and the Soline Canal have special physical properties: the Small Lake e.g. is exposed to a natural eutrophication process so that there is no oxygen in the lower depths.

Mungos live in the woods; the south coast is the habitat of the monk seal. In the southern bay of the Great Lake there is an approximately 200 m long and 120 m wide island on which the Benedictines built a monastery with the Church of Our Lady in the 12th century.

The church of St. Maria has Romanesque features. The porch with the high reliefs (saints) was probably built at the turn of the 12th and 13th centuries. In front of it stands a Renaissance portico with the Gundulic family coat of arms from the 16th / 17th centuries.

The square defense tower also dates from this period. A Romanesque bell tower stands on the northeast side of the church. In the baroque period, the church received two side chapels with altars.

Beside the spectacular evening dinner cruise along the Dubrovnik city walls, this cruise offers wine tasting on the amazing Brač Island, fantastic dinner on the peninsula of Pelješac, an Dalmatian local fiesta party...But thats not all, there are plenty of other features!

8-Day Cruise From Split to Dubrovnik on Antaris 2021