The old Croatian royal city of Nin is about 15 kilometers from Zadar. The city itself is located in a shallow lagoon, surrounded by fields of the salt works and long sandy beaches, and there is also the largest healing mud site in the country.

The hospitable hosts, the gastronomic delights, the offer of the Zaton Holiday Resort and the offer of private accommodation in Nin and Zaton attract tourists who are interested in ecology and culture. The most popular cultural event here is the so-called “Ninska šokolijada”, which advertises an old gourmet dry meat specialty of this area called “šokol”.

The city has been an important archaeological site for 3000 years – the remains of the largest ancient temple on the Adriatic, mosaics, the church, which is considered the smallest cathedral in the world, a unique romantic coronation church, the old Croatian ship Condura and more bear witness to that Antiquity, from a time when the city was the bishopric and the first residence of Croatia.

Why Nin is a Must Visit Location While Cruising Croatia 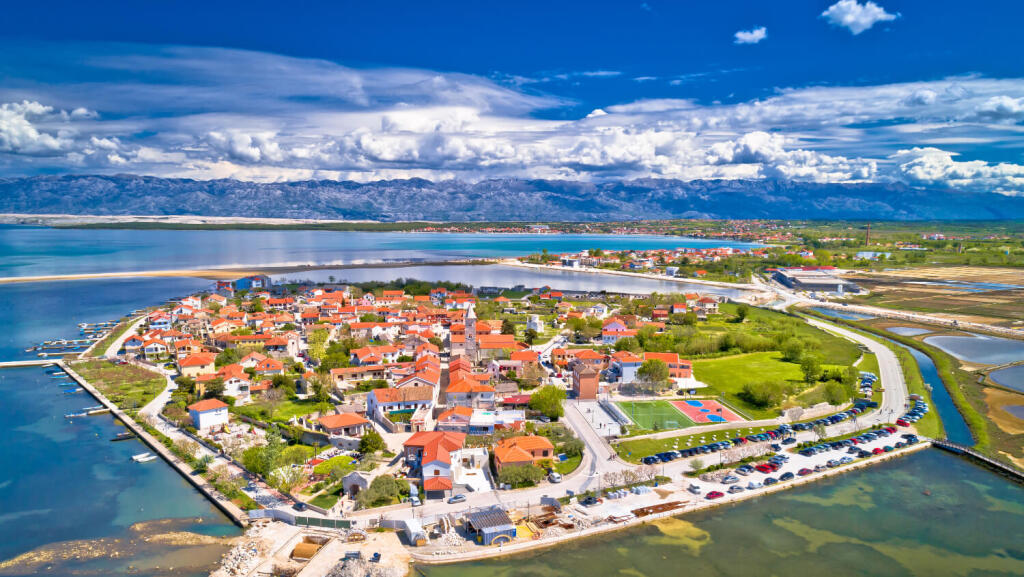 The first capital of Croatian kings of the 9th century, besides its rich cultural heritage – which includes the smallest cathedral in the world – offers you health tourism as well as enjoying the traditional way of producing salt, dating back to Roman times.

All the secrets of the Croatian people, many point out, lie in the walls of Nin, a town only 14 km from Zadar.

It is the oldest Croatian royal city, the first capital of Croatian kings of the 9th century. Situated on an island just 500 meters in diameter, with land connected to two centuries-old stone bridges, it has witnessed many historical events.

Enjoy a return to the past with exceptionally well-preserved cultural monuments – from the old Croatian churches built between the 9th and 12th centuries to the Church of Sv. Cross named the smallest cathedral in the world. Take a look at the Museum of Nin Antiquities and original Croatian wooden ships from the 11th century (Condura Croatica).

But Nin is not just a historic town – thanks to the healing mud that lies in the western part of the Nin Bay, it also boasts health tourism. For 40 years, the Zadar Medical Center has been using mud peloid for the treatment of rheumatic diseases, spine problems and skin diseases, while the unique geographical location of the lagoon offers ideal weather conditions to relieve respiratory distress.

Nin thus provides ideal conditions for rest (habitat of various bird species, beautiful long sandy beaches, preserved nature) and recreation (surfing thanks to storms and maestral), enjoying cultural heritage, but also a unique museum, the first of its kind in our Beautiful Museum – the Salt Museum.

Namely, Ninjans still cultivate salt production in the traditional way, so in the area where salt works are today, you will find the remains of a Roman stone slab used to remove seawater. Today salt is collected in the same way, and especially valuable is the flower salt enriched with calcium and magnesium.

Therefore, Nin should visit – just choose one of the events that are offered to you: pilgrimage to the Feast of Our Lady of Zečevo, the project “Nin – the oldest Croatian royal city”, the play The Crown of Croatia, the festival Ninski šokol, the project “Roads of Peter Zoranic Ninjanin”, as well as manifestations of the Days of Salt in the Royal Nin, the Festival of the Sun and the Lights in the Church of Sv. Crosses and others.

In Nin you will discover countless reasons for pleasure, from sightseeing of cultural heritage scattered throughout the heart of Nin old town to unique manifestations, and especially to enjoying the natural resources of Nin: salt, healing mud, magical sandy beaches and rich birdlife.

Things to See In Nin

Visit the ancient town of Nin, the first seat of Croatian mediaeval rulers. On this location, on the eastern edge of the Ravni Kotari region, the first settlement was the Illyrian Aenona, which continued as a relatively prosperous town in the Roman period. Between the 9th and the 11th century, Nin became the centre of the parish and the see of the “Croatian bishop,” whose jurisdiction extended over the whole area of Croatia.

The baptismal font of duke Viseslav was found in Nin, containing the first mention of a Croatian dignitary.

The church of Sv. Kriz (Holy Cross) from the 11th century and the fortified church of Sv. Nikola (St. Nicholas) in nearby Prahulje are examples of early mediaeval architecture.

A visitor in Nin will be surprised by the difference between the craggy island of Pag nearby and the tame plain around Nin with its long muddy beaches.

At the same time Nin offers a view of Velebit in the distance, whose peaks are hidden in clouds. Such dramatic changes of landscape are characteristic of central Dalmatia.