There are several reasons why you should visit Split, the town of the Roman emperor Diocletian. Split is located in the center of the old Dalmatia and full of beauty. There are either beautiful the old buildings and the beautiful girls and handsome boys. When you enter Split don’t be afraid to get acknowledged with the proud and spiteful citizens, who like to say that “Split is the most beautiful city on the earth”.

Split is ideally situated to be used as a base for exploring and cruising the middle Dalmatian coast region.

Split has 200000 inhabitants and it celebrates 1700 years of its existence (295-2005). The emperor Diokletian built a palace in antique times. A city developed within the palace and the inhabitants of Salona found a shelter in it in the beginning of the 7th century. Various rulers changed, blit the inhabitants of Split and its friends never surrendered. They went forward with a youth spirit and preserved the town to our time as you can meet it. Split is the metropolis of Southern Croatia- Dalmatia. 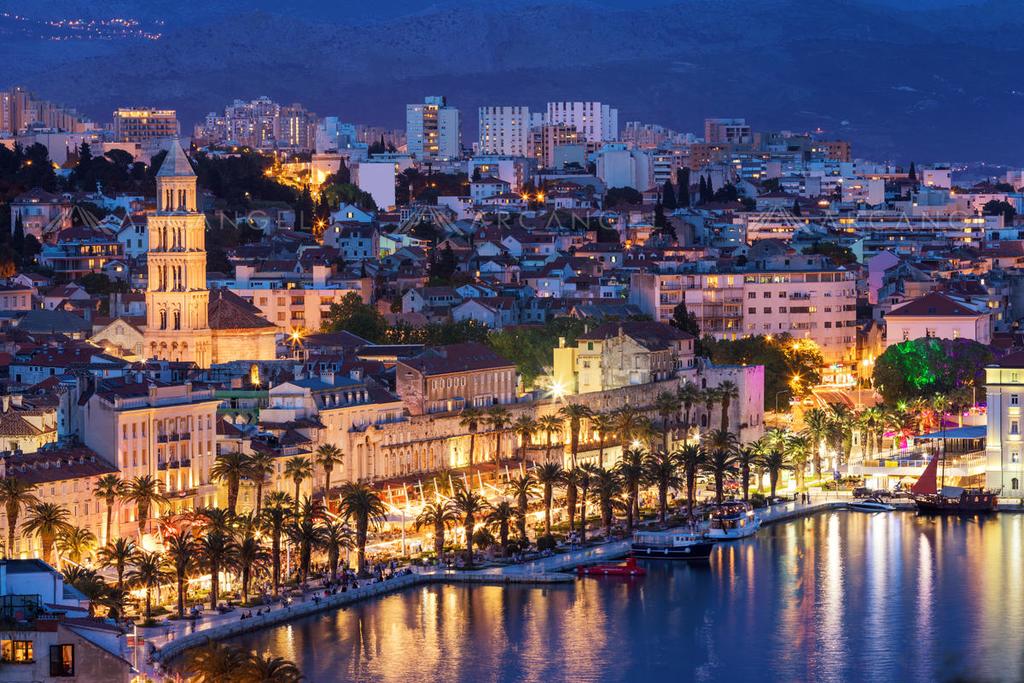 Split is the biggest Dalmatian city, founded in the early fourth century by the Roman emperor Dioclecian who was Dalmatian by birth. Dear guest, feel the smell of the stane in the Diocletian’s palace or the smell of the yellow ginster and the sea on the bili Marjan, or experience the cultural life and the excellent tourist offer of Split.

The center of the town with the Diocletian’s palace is under the protection of the UNESCO. Split has mail town beaches that attract mail guests and tourists. The best equipped and most popular beach is Bacvice and it is also is often the place of various manifestations.

You can convince yourself about the verity of the stories about Split after you have chosen our accommodation in a hotel, apartment or private pension. Split is a town/monument, full of beauty, monuments, museums, galleries, sport grounds and gastronomic objects. Where ever you go you can spend a nice time. You will experience the atmosphere of the true Mediterranean covered with the Brite of Split. Surely you will wish to come back.

For those interested in culture, Split offers rich pickings with fine architecture from the fifth-century Temple of Jupiter to the Cathedral of St Dornnius, a thrillingly many layered building, begun at the time of Diocletian, but incorporating much later elements, such as the Romanesque belfry, finished more than a thousand years later. It is like a grand mixture of the pagan and the Christian world, existing for centuries in harmony.

The city was a distant Roman outpost on the Adriatic’s eastern seaboard when the Emperor Diocletian arrived in 300 AD to settle in his new retirement home. The palace he built with its imperial apartments, temples, mausoleum, peristyle and vestibule remains the core of the city’s urban fabric, lived in almost continuously since Roman times. The story of its adaptation and survival – from Roman palace to medieval and then modern town – is remarkable.

Encapsulated within its massive walls, a labyrinth of passageways and polished marble squares follows the grid of the original fortified palace. Shops, cafes, restaurants and flats rub shoulders with seventeen hundred year-old Roman relics. Here under the gaze of granite columns and Egyptian sphinxes, the people of Split go about their daily business outwardly oblivious of the extraordinary cultural monument they inhabit.

The Luxor Café, smack in the middle of the third-century Roman peristyle, is a serendipitous venue for sipping cocktails and cappuccino and basking in the afternoon sun.

Despite its age, Split is a vibrant and boisterous city. It has a Mediterranean temperment and attitude unlike any other city in Croatia. The sprawling outdoor marketplace, east of the Silver Gates, is called the pazar, a word of Persian origin meaning bazaar.

Diocletian –  sent the best Roman builders to build his palace which he occupied during his retirement. The palace was, and in some ways still is, one of the most remarkable buildings in Europe and which still dominates Split, attracting visitors from all over the world.

The palace inspired the eighteenth century Englishman Robert Adam, who visited the site in 1757 and made numerous drawings which laid the foundation and influenced the Georgian style of architecture in Britain.

Many of the buildings of that period which grace London, Bath and Bristol have elements of architecture copied from his visit to the Palace of Diocletian. 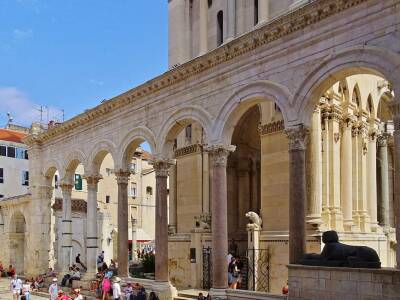 The centre of the old city is the Peristyle, the ceremonial entrance court to the old palace. Diocletian who died in 313 was buried in the mausoleum originally located on the east of the Peristyle, which towards the end of seventh century was converted into a cathedral.

His sarcophagus is thought to have been removed or destroyed during the building works.

After Diocletian’s death the nucleus of the city began to form within the walls of the palace.

Today there are about three hundred houses in it linked by passages and alleys accessible to pedestrian only, being too narrow for motor cars. 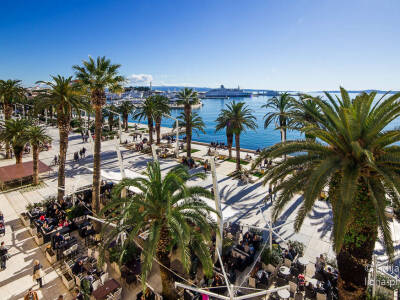 The Riva is Split’s showcase pedestrian promenade. Framed by palm trees and set against the backdrop of Diocletian’s palace, this picture postcard strip of waterfront embodies the spirit of a city coveted over the centuries by Rome, Venice and Byzantium.

It is the best place to begin exploring the city or while away an hour or two at one of its many pavement cafés.

Split is ideally situated to be used as a base for exploring the middle Dalmatian coast region. A short bus ride to the west takes you to the World Heritage Site of Trogir. The town lies on a minute island of the same name and is virtually moored to the mainland by a bridge and another island, Ciovo.
Trogir is a small medieval town of weathered Dalmatian stone with numerous palaces, monasteries and churches with squares. In the other direction towards Dubrovnik is the Makarska Riviera with pebble beaches and beautiful scenery dominated by Biokovo, the craggy Dalmatian mountains. Easily accessible by regular ferry service from Split are islands of Brac, Hvar and Vis.

The ferry terminals for the islands of Central Dalmatia – Brac, Hvar and Vis – are a short walk from the market along the harbourfront. With the railroad and bus stations there as well, the place bustles with travellers on the move.

You can reach the town on the Adriatic road, on the highway Zagreb-Split, by plane, by train or by ship.

Beside the spectacular evening dinner cruise along the Dubrovnik city walls, this cruise offers wine tasting on the amazing Brač Island, fantastic dinner on the peninsula of Pelješac, an Dalmatian local fiesta party...But thats not all, there are plenty of other features!

8-Day Cruise From Split to Dubrovnik on Antaris 2021