The Croatian part of the Adriatic sea have become an amazing cruise travel destination. This experience will be heartwarming for persons who enjoy relaxing time as well as adventurous activities. The Adriatic sea offers more than a one week cruise vacation.

Just imagine yourself sipping wine with your family and friends viewing the sunset at sea while enjoying the service from your attentive crew. The height of the small ship cruise season in Croatia  is July and August but encompasses April to the end of October. The climate is warm and sunny, with winds generally light, at most of the time making excellent boating conditions during summer months. While being on small cruise ship allows you to avoid the crowds as you please, you can be sure to find a greater choice of quiet anchorages during April, May or September and October.

Croatia is an European country washed by the Adriatic coast, a country of a thousand islands and it is an ideal place for sailors. Croatia offers the Mediterranean as it used to be: untouched and beautiful nature, secluded bays, cliffs, pebble and sandy beaches that lead to the clear sea …

After all the “stresses of modern era” and everyday madness, it’s time for “smooth sailing”, relaxation and true meditation. We will cater to you and help to make this uncommon saialing vacation unforgettable.

Let us show You the beautifull Adriatic coastal towns – the starting ports of our Croatia small ship cruises! You just have to pick your starting port and we will show You the available cruises from that specific port!

Dubrovnik (latin Ragusa) is an ornament of the Croatian south, the center of the Dubrovačko-neretvanska County and one of the most important historical and tourist Croatian cities.

It’s surrounded by the green landscape of the Mediterranean, blue depths of the Adriatic, white walls, the smell of herbs and remarkably well preserved monuments of nature.

Dubrovnik has beautiful beaches, the cleanest blue sea in the world, with unique flora and fauna and fascinating underground caves. Old Town and famous city walls are an unavoidable tourist attraction. There are dozens of churches and monasteries, villas and palaces from the 13th c. UNESCO included Dubrovnik on the list of World Heritage Sites in 1979.

The golden age of the Republic of Dubrovnik was in the 16th c., when the splendor and power of the Venetian Republic subsided. 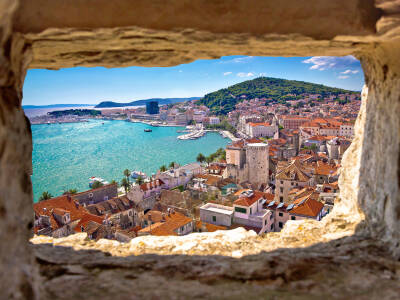 Being the 2nd largest city in Croatia and the biggest in Dalmatia region, Split is situated on the shores of the Meditrranean on the eastern Adriatic Sea.

Split is an important regional transit center as well as a popular tourist destination.

Split is also one of the oldest city in area and the city was originally built around the Diocletian palace.

The nucleus of the city of Split is Diocletian’s Palace, built by the Emperor Diocletian in 300., and in the 7th Century the massive building was abandoned long ago to settle within its walls. 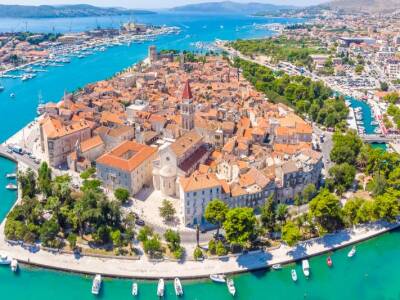 Located on the coast of the Kastela Bay, on the island of Ciovo and connected with the mainland by a bridge of stone – Trogir is one of the oldest cities in the Mediterranean. The city  is composed of eight villages:Arbanija, Divulje, Drvenik mali, Drvenik veliki, Mastrinka, Plano, Trogir and Zedno.
In Trogir besure to visit the Mlinice Pantan, which is formed by 12 small sources and converted into a lake. It is the habitat of many fish, birds and native plants.

Must see cultural sites and monuments: Benedictine Monastery of St.. Nicholas – the Benedictine monastery and church from the 10th century, Church and Monastery of St.. Dominic – The church has the oldest preserved description from 1579. year., Cathedral of St.. Lawrence – Roman basilica from the 13th century and one of the finest Renaissance monuments in Europe., Panel of Croatian anthem – Asked 1935th when Croatia is celebrating its centenary creation hymn, “Beautiful Homeland”.. Kamerlengo Fortress – The fortress was built between 14 to 15 century.

The city of Zadar in located in Northern Dalmatia. With more than 80.000 population it is the center of Zadar County. It’s the fifth largest city in Croatia. Because of its location and transport links with the entire Croatia and Europe (Adriatic highway, Zagreb – Split highway, railways, ship lines and Zadar airport), Zadar has become an important trading center of the region. On land, its background consists of an extensive plains of Ravni Kotari, which enables its smooth spatial spread, what makes it different from other coastal cities. Velebit massif sharply separates Zadar region from Lika and the continental part of Croatia, which was just recently altered with the construction of the highway, apropos the tunnel Sveti Rok. History of Zadar dates back to prehistoric times. The oldest finds date from the early Stone Age, while during the Neolithic archaeological research, a number of human settlements have been identified. The name of the village is connected with an ancient hydrographic term Jader, Jadra or Jadera, which originates from an ancient Mediterranean people. It was inhabited by the Illyrians in the 9th c. BC, and during the 6th c.

THERE ARE TEMPORARILY NO CRUISES FROM ZADAR AVAILABLE 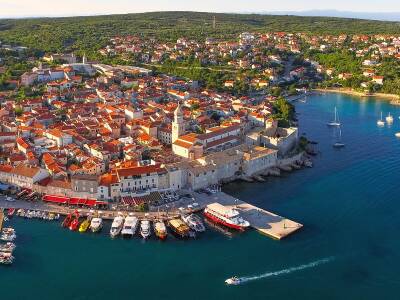 is the main center of the island. The center is dominated by monuments.

The town is situated in the southwestern part of the island, in a large cove bordering Punat Bay.

Town of Krk, the main settlement on the island, is among those of the Adriatic and Mediterranean towns of Croatia where traces of a multi-thousand-year history are visible at each step.

Visitors of Krk, especially those who are likely to reside longer there, easily notice many pleasant features of its climate.

With a mean annual temperature of 14.5°C, Krk is 4.6°C warmer than it should be, given its latitude. This is mainly due to the influence of warm sea.

THERE ARE TEMPORARILY NO CRUISES FROM KRK AVAILABLE 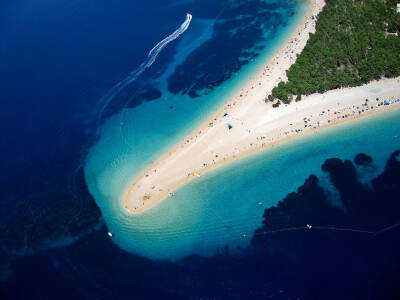 With twenty towns and villages, Brač is the largest Dalmatian island .Some of these picturesque towns are well established summer resorts offering numerous villa, apartment and hotel accommodation for a relaxing family holiday in idyllic surroundings .The most popular resort on Brač is Bol on the south side, facing the island of Hvar and is the principal tourist resort on the island occupying a narrow strip between the sea and the hills to the rear.

It owes its popularity to numerous tourist amenities and to one of the best beaches on the Dalmatian coast – Zlatni Rat (Golden Horn) it is a long pebble reef stretching for 400m gently merging into the sea. Popular sport facilities are provided for tennis, wind surfing, sailing, hang-gliding and scuba-diving.

The resort’s cultural sites of interest include the Dominican Monastery with its museum containing objects of archaeological interest and a Gallery of Contemporary Art.

THERE ARE TEMPORARILY NO CRUISES FROM BOL/BRAČ AVAILABLE 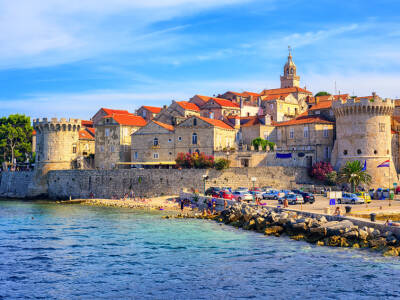 The town of Korčula is the tourist, economic and cultural center of the island of the same name and one of the best preserved medieval cities of the Mediterranean.

Located on the most communicative point of the island, on the line of commercial sea routes, it has always attracted travelers and settlers. The town of Korcula consists of 5 settlements: Korčula, Cara, Pupnat, Racisce and Zrnovo.

Ancient writers refer to it as the stone town of Korkyra Melaina, founded by Greek colonists from the Asian city of Knidos. After the Greeks, Illyrians and Romans, in the 9th c. Croats come to Korcula, which is the only town and island population today. 1214.g.

The Korčula Statute was adopted, one of the oldest legal documents in this part of Europe. In the 13th century born in Korcula, the famous world traveler and explorer, Marko Polo, and in Korcula there is still his birthplace.

THERE ARE TEMPORARILY NO CRUISES FROM KORČULA AVAILABLE 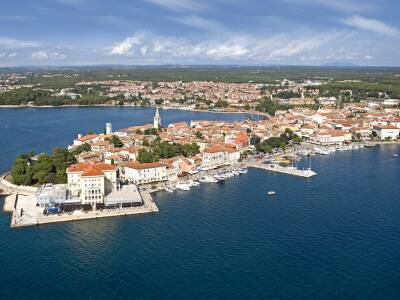 City of Poreč is almost 2.000 years old. It’s located in the harbor that is guarded from the sea by the islet of Sveti Nikola. Out of about 10.500 inhabitants, most live in the suburbs. Poreč region covers 142 km², with a 37 km long coastline, from Mirna River near Novigrad in the north to Funtana and Vrsar in the south. Poreč is the city of mosaics, thanks to a culture founded by Euphrasiana, whose diocese houses a museum of church art.

On the peninsula of the todays’ city, on its western side, there was originally a prehistoric, probably fishermen, village. After the conquest of Istria, in the 2nd c. BC, Romans established a military fort here (Castrum), which would later become the basis for the future of the city. With the fall of the Roman Empire the city is ruled by, one after the other, the Ostrogoths, Byzantines, Franks, Venetians, and after the collapse of Venice, Istria was shortly ruled by Napoleon, followed by Austrian government, the Italian kingdom between the two wars, and Yugoslavia and finally Croatia.

THERE ARE TEMPORARILY NO CRUISES FROM POREČ AVAILABLE